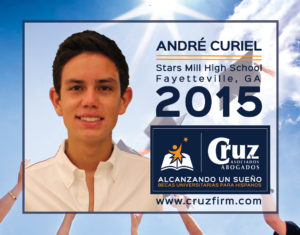 André Curiel-Gutierrez (Stars Mill High School, Fayetteville, GA)
For any young immigrant, adjusting to a new country is difficult. It’s not only difficult to ​​leave friends and family behind, but facing a new culture and learning a new language can be intimidating. Like many, André Curiel-Gutierrez faced this reality at an early age when his mother moved he and his sisters from Mexico to the United States, seeking a better future. Doing so was made more difficult as the family moved around searching for stable work and a good community to take root in. For Andre, adapting every two years to a new city and a new school only fueled his desire to excel in school, knowing that education was a ticket to the better life his parents wanted for him. Our 2015 Alcanzando Un Sueño Scholarship winner was inspired each day by the hardships of his mother and by focusing on excelling in school graduated with honors from Stars Mill High School in Fayetteville, Georgia spring 2015. Later that year, he entered as part of the freshman class at one of the world’s top technology universities, Massachusetts Institute of Technology (MIT). 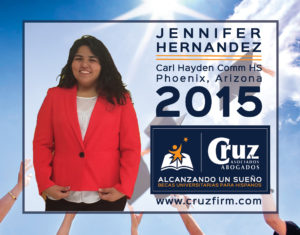 Jennifer Hernandez (Carl Hayden Comm High School, Phoenix, AZ)
Fear of family separation is not something that most high school sophomores have to deal with, but for Jennifer Hernandez one traffic stop brought this reality front and center. As a child of undocumented parents, Jennifer understood the risks her parents faced in hopes of giving her and her four siblings a better life in America, but until her mother was detained by immigration, she hadn’t contemplated the impact it would have on her life. Not only did she have to become a mother to her four younger siblings all while continuing to maintain a rigorous academic load but she was also determined to see her mother set free. Knocking on doors, asking for help from every politician and civil rights organization, calling on the press and finally taking to the streets with a group of supporters she was finally able to see her mother free. We are proud to name Jennifer Hernandez winner of the 2015 Alcanzando Un Sueño Scholarship. Jennifer graduated as Valedictorian of Carl Hayden Community High School in Phoenix, Arizona and attended the University of Southern California. 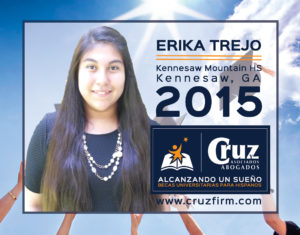 Erika Trejo (Kennesaw Mountain High School, Kennesaw, GA)
“Obstacles are defined in Webster’s dictionary as ‘something that blocks your path’, and indeed, I see them as ‘blocks’, but instead of blocking my path, I use them as building blocks to improve my personal and academic foundation” says our 2015 Alcanzado Un Sueño Scholarship recipient, Erika Trejo of Kennesaw Mountain High School. Erika has faced many obstacles in her family, through numerous illnesses that left her with a desire to peruse a medical career. Her participation in an internship program in the Neuro-Surgical Department at Kennestone Hospital helped to solidify her career goals and enter Georgia Tech to pursue a degree in biochemical engineering with the goal of entering Medical School after college. 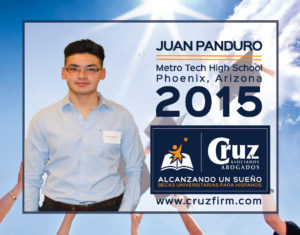 Juan Panduro (Metro Tech High School, Phoenix, AZ)
Childhood cancer claimed the vision in one of his eyes, but left him with an indomitable will to rise above this challenge and set the bar higher than life had intended for him. Moving through life with a disability was not easy, but Juan knew that his life was spared for a greater purpose and because of this, he studied longer and harder than the rest. Today, Juan Panduro is a recipient of the 2015 Alcanzando Un Sueño Scholarship, graduated 4th in a class of 358 at Metro Tech High School and headed to his first year college at Barrett, The Honors College at ASU.  “I am Juan Panduro. I am a cancer survivor and life for me has just begun.” 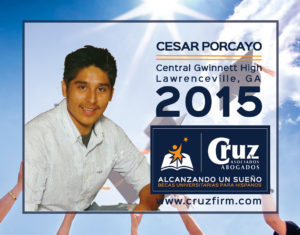 Cesar Porcayo (Centra Gwinnett High School, Lawrenceville, GA)
It’s easy for most students to take for granted the fact that in Atlanta, 9 of 10 households have a computer at home and that for most, the latest app is two clicks and a download away. These items, which are the basic tools for today’s student, were out of reach for the son of impoverished immigrants. Simple assignments for most became feats for a student like Cesar Porcayo, whose parents didn’t own a car and could barely afford to keep a roof over their heads. Seeing the struggles they faced and frustrated by the long hours his mother worked to make ends meet, as a sophomore, Cesar decided to take on a job to help his family, saving enough to buy them the car they desperately needed. If Cesar learned one thing from his family it was that education was the way out of poverty and he took that heart, pouring his best efforts into his studies. Our 2015 recipient of the Alcanzado Un Sueño Scholarship graduated in the top 3% of his class at Central Gwinnett High School and this fall with enter Georgia Tech! 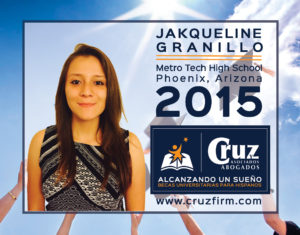 Jakqueline Granillo (Metro Tech High School, Phoenix, AZ)
Impossible does not exist. It’s only a placeholder to fill space for something that is yet to be discovered. Jakqueline Granillo believes in turning the impossible into reality and her secret is education. As a survivor of domestic violence and poverty, she learned from her mother that all things are possible through hard work, discipline and focus. Jakqueline is the recipient of the 2015 Alcanzando Un Sueño Scholarship, graduated 5 out of 358 students in her class Metro Tech High School in Phoenix, Arizona and moved to Massachusetts to study Aeronautical Engineering at the prestigious Smith College.